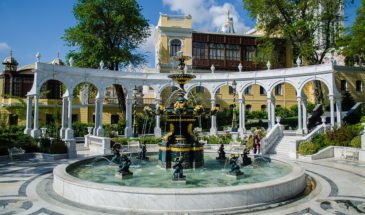 Azerbaijan tour Packages take you to the full trip of the Baku city, which is the biggest city on the Caspian Sea as…

Azerbaijan tour Packages take you to the full trip of the Baku city, which is the biggest city on the Caspian Sea as well as in Azerbaijan. Other than having one of the most famous current design, the city additionally has rich social and authentic locales to visit. One of the most notorious structures in the world is the Heydar Aliyev Center, which reflects the evolution of modern infrastructure. It is a wavy, flowing and curved style building with sharp angles. Inside this magnificent building, is a museum, an auditorium, and a gallery hall.

Another real fascination of the city is Baku Boulevard, which is an extended length of a lovely road along the Caspian Sea. A stroll through this stretch is a fanciful encounter one can observer on their get-away to Baku. Baku Ferris Wheel, fairly like Singapore Flyer, is a 60m tall wheel, that gives the spectacular view of the whole city.

Baku is well known for its rich, authentic architecture in the inner city. You will explore the old city and its features on the second day of your Azerbaijan 3Nights 4days tour package. Maiden Tower along with the Palace of Shirvanshah is a World Heritage Site and defines the fine architecture of the 15th century.

Flame Towers is another example of eccentric architecture in Baku. Flame Towers are 3 in number with an equal height 182m. Azerbaijan is the country of rich reserves of oil and natural gas, hence the burning flames of fire can be seen at different places like Ateshgah Fire Temple and Yanar Dag. Fountain Square has become the hub for all the tourists and young crowd. Here, you will discover fancy shops, bistros, cafés, and lodgings. Ganjlik Mall is the largest mall in the country of Azerbaijan which has all the top listed brands and other options for recreational activities like theatres, playground, cafes, and food court.

Note: Not include meals (Dinner and Lunch). Per meals extra 10 USD for per person

As soon as you reach the airport, our representative will take you to the hotel where you can complete all the check-in formalities after which you can relax for sometime and get over the jet-lag.
Later, Visit Baku Panoromic Tour, Flame Tower, Highland Mountain. ave a delicious dinner and get some rest for starting afresh the next day!

After breakfast at the hotel, it's time for the old city tour in Baku., The inner city of Baku has many historical monuments and places of rich architecture we will first take you to Maiden Tower and The Palace of the Shirvanshahs a World Heritage Site, and a famous landmark not only in Azerbaijan but also all over the world. Palace of Shirvanshah has been declared a pearl of the city due to its magnificent architecture.
Other attractions that you will cover in this excursion to old city are shops where traditional souvenirs are sold and our second day of Azerbaijan 3 nights 4 days package ends by your visit to the National Carpet Museum, Funicular Carpet Museum Boulevard Walk, Old City “Icheri Sheher” ( The Maiden Tower, Juma Mosque, Old caravanserais, Bath houses,
Shirvanshah’s Palace, Museum of Miniature Books); • The most famous street of Baku “The Fountain Square, National History Museum, Sea trip, Boat trip. At Fountain Square, you can munch for some tasty and unique delicacies as its a hub for many cafes, restaurants, and hotels. After this, our representative will drop you at the hotel where you can have a cozy and comfortable sleep at night.
Absheron Tour - For discovering the historical and natural areas, you will take a tour to the Absheron Peninsula and visit Yanardagh also known as the burning mountain, which is always lit up by the natural gas fire that flames on the hillside which it on the Absheron Peninsula. Azerbaijan is the country of natural gas and oil reserves, hence these fires can be seen at many places in Azerbaijan. Owe will proceed to the Ateshgah Fire Temple, which was the holy place of worship of Hindus, Sikhs, and Zoroastrians. Besides, you will have a chance to see the Mardakan Castle and the ruins that played an essential role in the history of Azerbaijan and visiting the Heydar Aliyev Museum, the architectural legend of Zahi Hadid, Heydar Aliyev Center, Have your dinner after a compelling trip and return to the hotel for a peaceful sleep.

After having breakfast at the hotel, you will go to the historical and national reserve of Gobustan. You will Meet your guide at your hotel in Baku and drive out of the city to Gobustan National Park. The park is actually a hill and mountain site at the southeast end of
Azerbaijan’s Greater Caucasus mountain ridge. Later, you will visit the Petroglyphs Museum and explore petroglyphs dating back to 10,000 BC and continue to mud volcanoes in Gobustan Reserve that is home to almost half of the world’s mud volcanoes. The ancient monuments and sculptures that have been in the mountains for millennia will make your day unforgettable. Go Bustan “ Rock Art Cultural Landscapes (at Seventy kilometers from Baku). Later , We'll see Mud Volcanoes in Alat, “Sadarak “ Shopping Center, “Bibi- Heybat” Mosque, Local Bazaar. Have your dinner after and return to the hotel for a peaceful sleep.

After you are done with your breakfast, wrap up all the things and proceed to check-out from the hotel. Our representative will drop you at the Heydar Aliyev International Airport, from where you can board your flight to India. Fly back home with happy memories and refreshed mind and soul.

Open All Close All

Are there any restrictions in Baku for couples?

There are no written mandatory rules in Baku for couples. But, it is much expected from the tourists to maintain a sense of decorum in religious places such as mosques. The place is a historical wonder teeming with large forts and museums where tourists are asked to maintain peace and decorum

How is the nightlife at Baku?

There a couple of beaches in and around Baku that has a spectacular nightlife. The beaches are equipped with clubhouses and disco halls and game halls where you can spend some good time with the crowd.

Are there any fun activities in Baku?

Yes, you may participate in a lot of fun activities. The Tufandag Summer-Winter Complex Invites tourists to partake in the games hosted here. You may also take a boat ride in the Baku Boulevard.

How safe is Baku for women travellers?

Considering the development of Baku city, it is considered quite safe for all kinds of travelers. But one’s own safety lies in staying alert all the time. Do not overindulge with the locals as it might be irksome.

What is the best time to visit Baku?

Baku experiences a pleasant climate all throughout the year. However, if you are planning a trip to Baku, you may wish to travel during the Winters. Summers can be harsh and dry, and usually not considered a great time to visit.