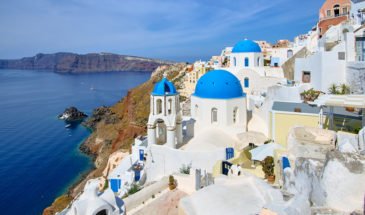 This weeklong Greece holiday will be your best summer vacation ever. Explore the beautiful city of Athens and the mesmerizing islands of Mykonos…

This weeklong Greece holiday will be your best summer vacation ever. Explore the beautiful city of Athens and the mesmerizing islands of Mykonos and Santorini. With comfortable stays at luxurious hotels, appetizing Greek cuisines, picturesque settings, crystal clear waters and friendly culture, experience Greece at its best. Boat sailing, climbing on top of a volcano and swimming in the hot springs of Caldera are just a few among the list of many exciting activities that you will enjoy.

The 7 days/6 nights Greece Tour takes tourists on an unforgettable journey through some of the most iconic landmarks in Greece, giving you the option to soak in the history of the place. When in Athens, travellers will be given a walking tour of all the important landmarks in the city – from the Acropolis to the House of Parliament. In addition to all these, artistic folk can appreciate the beautiful Byzantine churches like Sotira of Lycodimos or the Kottakis Church. After Athens, delve into the more picturesque locations of Mykonos and Santorini, known for its natural beauty and vast shorelines. The tour definitely highlights the three best cities in Greece.

Today is the first day of your 7 days/6 nights, upon arriving in Greece, you will be received at the airport and transferred to a hotel. Check-in into the hotel and spend the day exploring some local places or at total leisure; overnight stay in Athens.

Acropolis, Syntagma Square, House of the Greek Parliament, Sotira of LycodimosAfter enjoying breakfast at the hotel, take a fascinating walking tour around the city. The tour will take you to some of the best historical places in the city. One will visit the ancient Acropolis as well as the House of Parliament and Plaka, which are revered and respected for the rich history associated with it. Arrive at Syntagma Metro station, where the tour of historical exhibits begins with ancient grave stones, an aqueduct from the 5th century BC, pottery, a 2,000-year old beehive and a mosaic from the 5th century AD.Hereafter, the tour will take you to the House of the Greek Parliament, former Palace. Walk through Syntagma Square, the heart of the city that leads to Sotira of Lycodimos or the Kottakis Church. You will also be visiting profound and historical sites like Dionysus Sanctuary, the Philopapos Hill, the Herodion Theatre and the Mars Hill. Overnight Stay in Athens.

After breakfast at the hotel, proceed to the port for Mykonos. On arrival in the island, check-in into a hotel and spend the rest of the day taking a personal sightseeing tour; overnight stay in Mykonos.

Enjoy breakfast at the hotel. Spend the rest of the day exploring Mykonos at a leisurely pace by visiting some famous places of interest and restaurants followed by an overnight stay in Mykonos.

After today’s breakfast, check-out from the hotel and head to Santorini port. Upon arrival, check-in into a hotel and get freshened up. The rest of the day will be spent exploring the various sights in the city; overnight stay in Santorini.

Take a personal tour of Santorini

The day will be devoted towards a local tour around Santorini. Explore and discover the magical beauty of this island and witness the alluring charm of the Aegean Sea; overnight stay in Santorini.

Your Greece Tour Ends HereAfter breakfast at the hotel, you will be transferred to the airport, form where you can board flight back home your 7 days/6 nights greece tour comes to an end.

Note: Price is based on minimum of 2 pax traveling together.

Open All Close All

Can this 6 nights, 7 days Greece honeymoon tour be customized?

Yes, honeymooners can easily get this Greece honeymoon package customized to their pocket and preferences.

Which leisure activities can tourists delight in during their Greece trip?

Destinations like Athens, Santorini, and Mykonos offer ample options to delight in leisure time in Greece. Travelers can take pleasure in activities as per their location and interest. Watersports, trekking, walking tours, visiting museums, concerts, shopping, and city tours are among the most taken up leisure activities.

How can couples enjoy nightlife in Greece?

To enjoy the best nightlife in Greece, couples can head to Mykonos, which is the favorite of night partiers. Bars in Little Venice are quite happening. Kalo Livadi Island houses a hip and happening beach and offers delicious fares.

Where should couples go to explore the best islands of Greece?

What Is The Best Time To Romance In Greece?

Located on the eastern edge of Europe, Greece is a country in the Balkans that acts as a link to the East. Greece is characterized by sandy beaches, cobblestone-dotted streets, and pristine seashores. Greece reminds of that paradise every couple dreams of visiting. But what is the right time to visit Greece?

Peak Season in Greece
During the months of July and August, Greece experiences a heavy inflow of tourists. Some of the popular destinations in Greece such as Mykonos, Santorini, and Rhodes get crowded during July-August. Some of the preferable places to visit in Greece during the mid of July and August are Lemnos, Thasos, and Samothraki. The days are usually warm during these seasons but you can expect a relatively cool temperature during the night.

August is that month when Greek take their annual leave. You will get a chance to mingle with the local crowd. If you are booking with one of Greece honeymoon packages for couples, you may revise the itinerary according to your date of travel.

For those honeymooners who want a lively celebration, this is a good time to visit.

Shoulder Seasons in Greece
The ideal time to visit Greece is between the peak season and offseason. The shoulder seasons in Greece are April-mid-June and September-October. These are basically the spring and autumn seasons in Greece. The weather remains pleasant during this time.

May and October are the best seasons for spending time in the Greek islands Islands and the cities are less crowded. Hence, couples can have their own private time during the Greek honeymoon tour.

Off-season in Greece
The coldest months in Greece usually begin in December and last until March. The weather remains cool along with little to average rainfall. Sometimes, snowfall can be experienced during these months. This is a good time to book a honeymoon package to Greece.

Couples can enjoy the snowfall during the months of December-February Good time to visit popular cities such as Thessaloniki, Nafplio, Athens and Ancient Olympia. If you are on a budget honeymoon trip to Greece, these months offer you the best deals on stays and flights.

Is it safe to travel Greece?

Yes, it is perfectly safe to travel, you just need to be careful in your own way like at other places.

What sort of clothes to take for the trip to Greece?

Casual summer clothes with shorts are just perfect for a trip to Greece.

How is the food in Greece?

The cuisine here is rich and enticing, there are a number of restaurants nearby to help you with multiple cuisines.

When is the best time to indulge in the trip to Greece?

You can visit Greece throughout the year except July and August as these are known to be the hottest months in Greece.